Seat Belts And Car Seats Really Do Save Lives

Make Sure You Buckle Up

Every day children across the country are dying in car accidents that could’ve been prevented. Even worse, one simple step parents take could prevent them from sustaining fatal injuries in those accidents. A recent study found that 43% of children who died in car accidents were not restrained properly at the time of the accident. Encouraging children to buckle up, requiring them to use proper car seats, and ensuring that those car seats are properly installed are vital to protecting them from serious and fatal injuries during a car accident. It’s almost a cliche at this point but it bears repeating, seat belts and car seats really do save lives so buckle up! 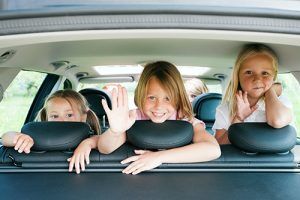 The Center for Disease Control and Prevention has long stated that seat belt use for all age groups is higher in states with stricter seat belt enforcement laws. However, traffic fatalities are going up across the United States, including among children. This most recent study breaks down and analyzes data from all car accident fatalities between 2010 and 2014 in an attempt to understand why. In all, they identified 18,000 children under the age of 15 years old that were involved in a fatal car accident – and 15.9% of those children died as a result of the crash.

This study, published in the Journal of Pediatrics, found that across all states, 43% of the children who died in car accidents were not properly restrained or were not restrained at all. They study pointed to improper use of seat belts as a big reason that children suffer fatal injuries. For children, if the seat belt isn’t properly fastened across the body, usually due to kids not being in the appropriate car seat or booster seat, then the results can be deadly. States need to encourage proper car seat use and seat belt restraint use. They found that even a 10% improvement nationally in the use of appropriate child restraints in cars would cut the child crash fatality rate significantly.

If your child rides in the car with you, it is important to know how to best keep them safe, by knowing our 8 safety tips that could save your life. Using appropriate child car seats and booster seats and ensuring that those devices are properly installed is a main way you can ensure their safety in a car accident. According to the National Traffic Safety Administration and the CDC, children under the age of 13 should ride in the back seat. Here are some additional tips the agency recommends:

If you or someone you love has been injured in an accident that was caused by another person’s negligence, the auto accident attorneys at Rector Stuzynski LLC can help. At Rector Stuzynski LLC, our Colorado Springs car accident attorneys have the experience and the resources to build a case that is designed to obtain maximum compensation for our clients. Call us today at 719-578-1106 for a free initial consultation and review of your case.